About the Resilience Indicators 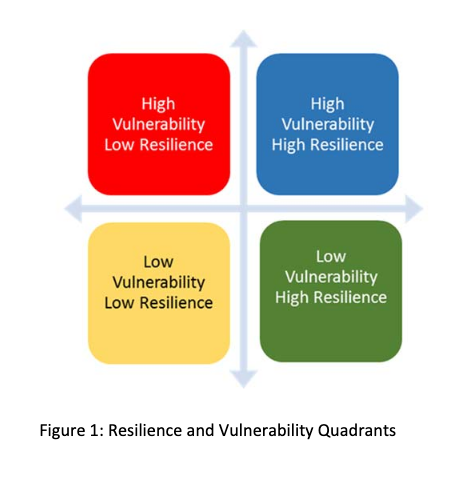 The indexes are organized based on indicators in four categories — social, economic, infrastructure and environmental— for every county in the United States. In each category the index matrix was used to categorized counties based on a set of county-level indicators gathered through publicly accessible data sources. From this, counties were scored and ranked on the index according to their standing relative to the national median resiliency and vulnerability in each category. Many indicators used in determining this score were updated in April 2017 with the most recent data available from the 2011-2015 American Community Survey from the US Census Bureau. In total, about half of the infrastructure data sets were updated and over two-thirds of the social and economic indicators.

Environmental measures are designed to capture the likelihood of disasters befalling a community. Consideration has to be given to the number of and type of disasters and how to account for the bias that occurs in measuring disasters that are isolated in geographic regions (for example, Midwestern counties face limited risk for hurricane activity).

Economic measures describe the economic strength and vulnerability of a community or region.

Infrastructure measures rate the capacity of a community to withstand a natural disaster and manage evacuations and immediate repairs follow a disaster event. The vulnerability indicators capture particular at-risk infrastructure as well as potential challenges to evacuation and rebuilding efforts.

Social measures are intended to capture the degree to which a community has a strong set of social and human capital with which to rebound from a potential hazard event. Social vulnerabilities are characteristics of the population or community that cause isolation or erosion of social capital, and therefore work against the community following a disaster.

Learn more about the methodology behind the resiliency index and selected indicators here.